Populist Daily Politics, Culture and American Life
Home Obamacare Obamacare Is Not Collapsing or Spiraling Down. Just Fix It!

The Republicans know that the Affordable Care Act, more popularly known as Obamacare is not “spiraling down” or is it irretrievably flawed.

The fact is that Obamacare worked well and, as we will show, continued to improve…and still does in many, many areas…until Senator Marco Rubio’s amendment in late 2014 to an appropriations bill ended the “corridor payments” a common situation in the insurance business, meaning payments to health insurers in new situations where conditions are not accurate enough from an actuarial standpoint to set rates.

Rubio’s amendment, a vicious political act, with a complete Republican Congress in control, when placed on an appropriations bill, meant that the President, then President Obama, could not stop it. The result was to completely pull the rug out from under insurance companies, not just huge ones making tons of money from Obamacare, but small co-ops who were taking a risk in order to offer hope in the form of affordable health insurance to millions who might otherwise, as we see now, not have health care.

Paul Ryan knows this. He is now fool. But he is the bought-and-paid-for lackey of the Koch Brothers. He is also the go-to guy of choice for Donald Trump on many situations. Ryan will work for anyone who will pay him. And he has done it again…this time…perhaps….to someone’s benefit besides his own. Given the connection between Scott Walker and Ryan and the huge number of anti-labor billionaires in the ALEC group, (the Right Wing American Legislative Exchange Council corporate CEO lobbying organization) it would not be a surprise to learn that the proposed  and welcome Foxcomm factory in Wisconsin was a payoff to keep Ryan in office…because it is going to be very clear soon that he has lied repeatedly about health care. And here is one example: 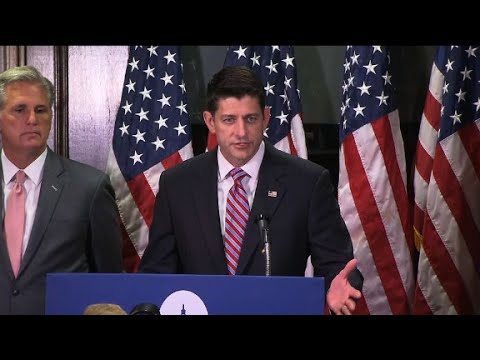 First of all, Paul Ryan never made a single comment when Rubio cut financial supports for health insurance companies out from under Obamacare. He never said a peep when 20 governors denied Medicaid to millions of Americans. In Virginia, just recently, television networks showed free, charitable clinics being sponsored in the western part of the state, as if we were in some foreign country and it was Doctors without Borders. The former Republican governor of Virginia denied his citizens Medicaid, as did many other Red states. Medicaid for the poor and elderly and homeless was free to these states…100% paid for by Obamacare and yet people like Paul Ryan sat by and said nothing as the Republican governor of Virginia denied care to the most vulnerable of his constituents.  But it need not be this way.

Ryan knows that with one single act, the restoration of the funding for health insurance companies, about $3 billion a year to insure that premiums stay reasonable there can be viable insurers in all areas. After all, this is not come conservation or environmental or religious belief issue. This is the health, in some cases, life or death of average American families. Not all, but certainly at the very least about 45 million Americans are affected by the individual health care market. Ryan and Rubio and the other Republicans working for the Koch Brothers and the Corporate Oligarchy want to destroy it for one simple reason: Greed.

Repealing Obamcare would repeal the tax mandates on the rich, the surtaxes. The very rich, that is, people making over a million a year, if they pay, say, $300,000 in taxes (which they don’t) then they would pay something like $9,240 (3.8% surtax) additional to help others have health insurance…via the for-profit system. By the way, we could do it without subsidies for insurance companies and give everyone health care and pay less than we pay now by simply giving everyone who does not have health insurance through an employer (that is, those who already get subsidized health insurance) a buy-in to Medicare for a reasonable rate. Medicare works because it does not use a private for-profit health insurance billing system but uses its own. Only the Medigap plans, which keep going up and up and are already outrageously expensive for people with low fixed incomes, are private and costly. Medicare costs about 3% to administer…and if we were all on it, our health care costs would drop by half.

Paul Ryan’s supporters, the ones paying for his very expensive campaign ads and for those of Senator Ron Johnson, who thinks even the worst of the Republican plans are too good for Wisconsin and other American citizens, and  those of Scott Walker, that keep him in power, those supporters are the ones now paying the surcharges and the ones who want all the taxes on Obamacare and other taxes removed so that they can get another big income tax reduction! That’s what this is all about.

You don’t need to take anyone’s word for it. You can do the math yourself. Senator Tim Kaine of the largely Republican state of Virginia had some questions for Mick Mulvaney, the head of Trump’s Office of Management and Budget and then he laid out the numbers for Mulvaney….and they don’t add up.

Mulvaney is a liar. Health care for those on Medicaid is not going to improve. You don’t have to be a genius or Senator Kaine or Senator Sanders to figure out that removing a trillion dollars from Medicaid is not going to give you the same services. But all of this is unnecessary. And here’s why. We don’t need to repeal and replace Obamacare. We simply need to restore the funds that Senator Rubio removed and then add some changes.

Data from the Kaiser Family Foundation, one of the oldest and the most reliable hospital-health organizations in the country  shows several stabilizing factors. The first quarter of 2017, as it turns out, was one of the best quarters in the history of the ACA, despite significant regional problems caused by the withdrawal of corridor payments.

One interesting fact is that the differential between premium costs and claims seems to have stabilized. So those shaky first couple of years, into 2015, began to level out. Even though premiums did rise by 20% on average, year over year, the important fact is that the incidence of premiums versus claims began to level off. As an example, in 2015, for every  $273 in incremental cost, there was $310 of premium charged against it. (This is not an analysis of premium cost versus medical costs, just an analysis of benchmark costs, year to year.)

In 2016, for every $337 in premiums there were $288 costs and in 2017, the gap widened, with $403 in premiums for only $303 in costs. Now these numbers do not take into consideration many factors such as subsidies in which case prices do not go up, etc. But the point is that the costs are remaining lower than previous year’s premiums..that is, actual premiums paid versus actual costs experienced. This does not take into consideration the problems caused regionally by individual health insurance companies dropping out. It does show that perhaps many did not drop out for the reasons they stated.

The second factor is the increase or decrease in the number of days in the hospital. The fact is that while the number of hospital days spent in the first quarter of each year since 2011 has increased from 20.6 days in 2011, it peaked at 25.3 days in 2015, dropped to 23.8 in 2016, then rose again slightly to 24.7 in 2017, even with much greater enrollments. The point here is that the number of hospital-stay days is relatively stable, considering the fact that with much more comprehensive care available since the ACA, there naturally would have been, and was, an increase in the average number of days in hospital days.

This data and other data available from Kaiser indicates several things. Given rates and costs, many insurers are doing well. This is also indicated from actual examinations of company financial data in the public. Some other companies have not done well and there are several factors at work. First of course is the removal of the security of the risk corridors that were established in the system. This was done by Congress for political reasons without consulting the health insurance industry.It was a mistake and it destabilized many, many markets. The second factor was the other political influence, namely, the constant barrage of misinformation, such as “death panels” and “government takeover” and “losing your doctor” and a host of other Right Wing propaganda efforts to confuse the market. The additional political attack of a constant, ceaseless wave, one-after-the-other of Obamacare, so-called “repeals” over 60 in all over 8 years instead of trying to make the plan work better, caused its current troubles.

The Patient Protection and American Care Act, ACA, Obamacare…whatever you want to call it, is still the best solution possible and the only plan anywhere that has a structure developed by the professionals in health care. It covers most Americans while allowing most of them to keep their employer based health care. It covers small businesses, although that could be improved by expanding, rather than contracting, it. This would help companies expand by allowing them to buy into larger pools, such as union plans or association plans. Furthermore, subsidies for the poor at something like a few billion a year are a very small price to pay for universal coverage. The hospital system and the entire health care industry has profited.

We don’t need more tax cuts for the rich. The rich are rich enough. We have more cars and homes and vacations and frivolous adult and children’s toys than we need. What we need are more jobs, better education, more technical training, rules about sending jobs abroad and how we take care of our own citizens. Restore the corridor payments. Offer a public option to those temporarily without a health insurance option (i.e., basically opt-in to Medicare or an upgrade of Medicaid.)

That is all we need to do for now, while we revise and improve Obamacare. Oh, and one more thing. Anyone who voted for any one of these programs…which they knew…and they did…would throw mothers and children and elderly off health care rolls…vote them out.

It’s easy. Not one Democrat voted for any of these repeal and replace tax-cut scams. Just don’t vote Republican next time and you’ll be fine!

You have Successfully Subscribed!